An endless maze of canals of glistening green, torn up by speedboats and then settled by gentle gondolas, Venice is unlike any other city in the world. Built over centuries upon foundations of fortified wood submerged in the sea, Venice was once one of the strongest empires in Europe and sought to fiercely separate itself from Rome. Today itâ€™s a city known for its romance, intrigue, incredible architecture and fine food and wine. Home to many significant churches, each with its own story to tell and enough pizzerias to keep you stuffed the entire time, Venice will have you wandering all weekend in awe of the sheer Italian beauty this city has to offer.

Although Venice is home to an impressive collection of amazing churches and absolutely no shortage of epic architecture, one of the most satisfying things to do here is to simply wander. Walk down a laneway and get lost, don’t even worry about what direction you’re going in. Within about 2 minutes you’ll have completely lost your bearings but will be rewarded with long sweeping canals adjacent to terraces of all different colours reflecting the sunlight.

Along with St Mark’s Basilica, the Doge’s Palace is high on the shortlist of must-visit attractions and the first thing you notice is the striking, symbolic archways that are synonymous with Venetian architecture. The Doge was the main man; the doyen of Venice. He was selected over years of scrutiny from the elite high echelons of society. He became the representative of the Republic throughout Europe, but never had any real power or authority in Venice, and was in office until death. Pretty demanding job with not much reward I reckon. The Palace contains a grand central courtyard, where stages of construction over the centuries are clearly visible and contains the Giant’s Staircase – where new Doges were wheeled out and presented to the city. It was also home to the Senate and the Armoury; and out the back you can retrace the grim steps of prisoners through the dank cells, including over the Bridge of Sighs (which spans a canal), where prisoners would catch their last glimpse of beautiful Venice before being locked up, never to see the glistening blue canals again.

St Mark’s Basilica and the Piazza

Essentially the centrepiece and most trafficked area of Venice, St Mark’s Square (“Piazza San Marco” as you’ll see on all the signs dotted around the city to help you find your way) is a jaw-dropping spectacle when you first round a corner and catch a glimpse of it and the how vast of an open space it creates in such a densely built metropolis. It is here you will find the amazing St Mark’s Basilica, the city’s most famous church and status symbol of Venetian wealth and power through the ages.Â The domes atop this timeless building make a majestic imprint on the skyline and the gold leaf adornedÂ interior utterly blows you away once you step inside.

On the island of San Giorgio, this church will give you a chance to step outside the hustle and bustle of the main archipelago of Venice and get away to a quiet place, not often frequented by all who visit the city. Take the water taxi across to the island and go up the tower here to enjoy unrivalled views of the entire Venetian lagoon.

Completed in 1430, this church is one of the most elaborately decorated and adorned in Venice. It is where many of the city’s most revered religious and civic figures are buried along with 25 of the former Doges. 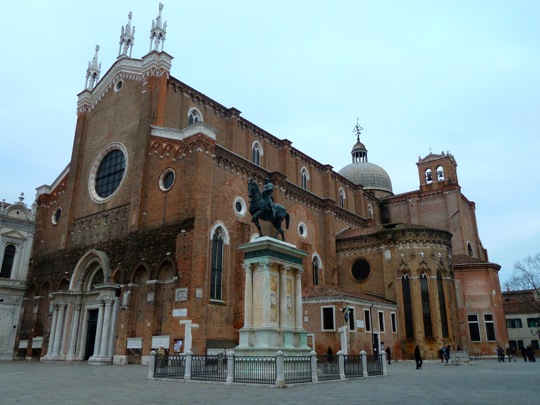 The church is home to a significant number of exquisite paintings and monuments commemorating the lives and deaths of the Doges. It’s well worth a visit to appreciate the key role this church has played in the city’s history.

Along with the Doge’s Palace, one of the first common images people conjure up when you mention Venice is the captivating Rialto Bridge, the oldest span across the Grand Canal. The stone bridge replaced a previous timber one and was completed in 1591. It builds up to an incline at the top with a central archway on either side providing great sweeping views of the Grand Canal. It’s filled with shops on either side selling Venetian souvenirs mainly, but a few shops sell some nice chocolate worth getting your hands on.

I could go on and on about the amazing food in Italy. Venice serves up incredibly authentic and mouthwatering pizza and fresh seafood and pasta dishes that will make you want to pull up stumps and become an Italian resident. In addition to potential opulent feasts at dinner, you’ll find lots of ciabattas being sold packed with fresh fillings to tide you over at lunch or late at night in lieu of the usual greasy kebab. Available throughout the city in any of Venice’s traditional, family-run pizzerias and cafes, a trip to Italy is never complete without sampling your fair share of pizza and espresso. Pizza is served by the slice in a number of different ways depending on the vendor, from straight on a piece of paper like above, to folded in half and neatly wrapped in packaging for take away action. The espresso will keep you buzzing and able to lay down some serious tracks around the canals.

a) find where these places below were and; b) the address wouldn’t be much used to you because everything is *so* hard to find in Venice.

Ask either your hostel manager or a local where these barsÂ however and they should be able to sort you out.

A cosy little bar, popular with locals and close to L’Imbarcadero hostel, Alla Poppa has a great casual bar in the first room followed by a more intimate seating area in the next. Great for a few drinks in the evening before continuing deeper into the laneways in search of more mischief. Closes at 2am and does get quite busy. Open till 3am and right near Rialto Bridge, this is your last bastion in terms of getting a drink before all the places close up to abide by Venice’s strict liquor laws. There’s nowhere inside to stand or sit, so everyone just hangs out the front drinking. Service is prompt and in your face, so know what you want off the board before you approach the bar. A great place to mingle and meet some locals late at night after everyone is well and truly chockers with Dutch Courage.

A number of options exist for getting down to Venice, with a bunch of airlines flying from the UK into both Veniceâ€™s main airport of Marco Polo (VCE) and the smaller, further out airport of Treviso (TSF).

No direct flights to Venice from Manchester.

No direct flights from Edinburgh to Venice.

The quickest and cheapest way to get to the city is to take the Venezia Express coach from Marco Polo airport (marked â€œGreen 1â€ on the Departures board). It takes 20 minutes and goes to the main bus station at Piazzale Roma on the northern side of the city near the train station. This map will give you a birds-eye view of everything I covered in the post, giving you some perspective into the lay of the land.

View 48 hours in Venice in a larger map

As a word of warning, Venice is a confusing labyrinth of canals and meandering laneways. A lot of your time will be spent negotiating the city, and youâ€™ll rarely pass a part of the city more than once.

Get around in Venice

Venice is a fairly compact city and can be easily covered on foot, but be aware that you will get lost within the first 5 minutes. Aimlessly wandering around laneways and along canals is what makes Venice great, and is all part of the experience. Walking around Venice takes many hours and lots of energy, so the water bus is a good option for getting up and down the Grand Canal easily. There are stops dotted all over the city and service is prompt. Venice has no shortage of upmarket hotels, mid-range hotel chains and a good selection of hostels. I stayed at the Lâ€™Imbarcadero hostel right on the Grand Canal near the Riva San Biasio waterbus stop and a short walk from the bus and train station. This is a hostel where youâ€™ll feel like youâ€™re staying in a mateâ€™s flat rather than a hostel due to its friendly and relaxed nature. The hostel manager, Alex is a top bloke who knows Venice well and is more than happy to recommend sights and where to go for a drink once night falls (he does a good pub crawl). Beds are in the 6 bed mixed dorm or the 5 bed girls only dorm, or private single rooms are available for a bit extra. Alex cooks a big load of pasta for dinner every night, which is an extra â‚¬4 if you choose to partake (definitely worth it!). Breakfast of cereals, toast and spreads and eggs is free every morning. Bathrooms are clean and get the job done and the showers are massive epic Italian setups with rainforest showerheads. Thereâ€™s also a TV room with plenty of DVDs to watch and relax after a hard day of traipsing the city.

Due to its touristic nature, Venice sports some pretty hefty prices in the most frequented areas around Rialto Bridge and St Mark’s Square. You can however avoid this by eating in small cafeterias and pizzerias off the beaten track a bit. An espresso is â‚¬1, a slice of pizza will set you back â‚¬2 – 2.50 each and a beer will cost you about â‚¬6.Â A night in the L’Imbarcadero hostel is between â‚¬25 and â‚¬32 (depending on season) for a bed in a shared dorm.

Transport wise, you can pick yourself up a 48 hour pass for the water-buses for â‚¬18. Considering that one trip is â‚¬6, a 48 hour pass is well worth it if you take 3-4 trips on the waterbus whilst you’re in Venice. Entry to most churches is no more than a few euros. Entry to the Doge’s Palace is â‚¬12, however this entry fee also gets you into the Archeology Museum (Museo Archeologico) and the Civic Museum (Museo Correr) in St Mark’s Square.

Venice doesn’t have a massive party scene nor an immediately apparent list of landmarks to check off, but it is a city that you won’t forget any time soon due to it’s sheer character that nowhere else can replicate. Many cities claim to be “the Venice of the *insert geographical region here*”, but nothing comes close to the real thing.