So you’ve decided to get some mates together and head over to Munich for Oktoberfest to saturate your bodies with delicious, Bavarian beer. I applaud this decision, because it’s one of the wildest, craziest weekends you’ll ever have.

Opening weekend is when all the fun begins. There’s a huge parade down the main thoroughfare of Oktoberfest with lots of music and tens of thousands of people coming together from all over Europe and indeed the world to celebrate one thing, BEER. Make sure you get there SUPER EARLY to secure a table in one of the beer halls. Make no bones about it, this is absolutely IMPERATIVE for the first day. Doors open at 9am, and as soon as they do it’s a mad rush to secure a table. The reason this is is because if you’re not seated, you don’t get served. No beer for you without a bench, buddy.

If you’re booked in on a tour (from Topdeck, Fanatics etc), they will probably make sure you’re there at about 7:00am-7:30am to start queuing. You’ll be crammed in with thousands of other people near the doors on each side of the hall, and as soon as they’re thrown open, you need to find a table and OWN it.

But it’s still not beer time. Because even though doors open at 9am, the first keg isn’t tapped until 12pm by the Mayor of Munich after the parade down the main drag. So you’re in for a few hours wait, drinking coke and playing card games. But let me tell you now, that first 1 litre stein of beer after the epic wait will be one of the sweetest you’ll ever have. Then the band fires up, the ladies serving beer get busy and the fun REALLY begins. Beside chugging loads of beer, make sure you sample the food on offer. There’s people roaming around selling sandwiches filled with meats and salad, and pretzels LOTS OF PRETZELS. Once you get a few more steins under your belt, make sure you buy what’s been cooking in the kitchens out the back. You can get entire chickens and massive serves of pork knuckle, all piping hot and ready for you to go primal on. Do make sure you sample a few of the different beer halls. Each has their own characteristics, hall layout, Bavarian oompah band and of course, type of beer. There’ll be dancing on tables and you’ll meet lots of locals (including the ones who bring their ENTIRE family, grandparents and all) and be singing theÂ Ein PrositÂ beer drinking song with them.

Most people get kicked off their tables and out of the beer halls at 3pm by all the locals that have reserved tables, so when this happens head down to the showgrounds. There’s all kinds of rides daring you to bring all that beer and food up, from log rides to those things that swing you up and down and upside down to fully fledged roller coasters like the one below. 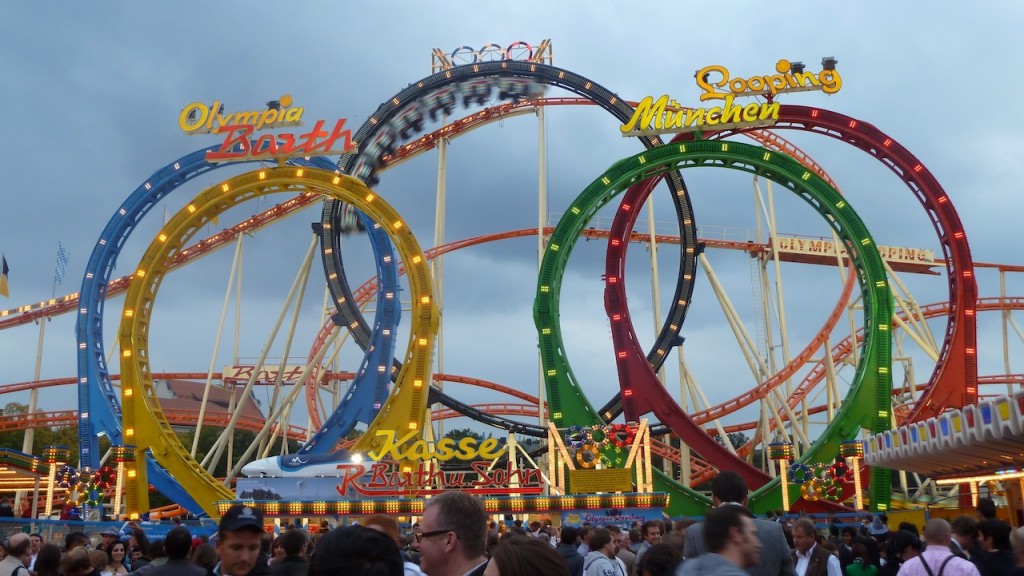 Do try to pace yourself. Many a lad (me) has gone out the gate too hard and ended up on the big hill passed out while all his mates are still going. At least keep yourself upright long enough to get back to your hotel/hostel/campground, because the last thing you want to do is wake up on the other side of Munich, out of cash with no way home.
The first day is hectic, but every day after that is a bit easier. You won’t have to queue so feverishly as the beer flows from 9am and there’ll be much less people to contend with so early in the day.

Oktoberfest is all kinds of rapturous fun. Â You’ll meet people from everywhere, sing songs with them, drink a gratuitous amount of beerÂ and eat some damn good food. The best thing about it all? The Oktoberfest beers are brewed following a special Bavarian law that states that they can’t have any preservatives in them, Â Edit: I’ve been advised this isn’t why I didn’t get any hangovers the whole time I was there. It was probably just all the pretzels.. My last piece of advice, stay out of the pigpen in the Hofbrau Festhalle if you value your pants. 🙂

I hope everyone going to Oktoberfest has an awesome time, Prost!