One of the greatest kicks I get out of travelling to the many different countries in Europe is trying the local drink on offer. Whether it’s port wine in Porto, whiskey in Scotland or trappist beer in Belgium, I like taking a break from cruising round town to get my imbibe on and meet the locals or other travellers over a drink or five.

I decided it was time to put together a list of my favourite beers from around Europe. After two years gallivanting around the place, I’ve come up with a decent cross-section of lagers and ales that I really like.

Sagres is a lager hailing from Portugal. I first had it in Lisbon and found it to be one of those beers that you can really knock back easily on a night out or on a warm afternoon in front of a cafe somewhere. It comes in its own distinctive glass as seen below and you can get it in almost every bar and pub in Portugal. Sagres is a beer you can get outside of Portugal as well, and your best betÂ will be in Brazilian restaurants or London pubs with a more discerning lager variety on tap.

I came across this little beauty in Barcelona in 2010. Estrella (pronounced “es-trey-ya”) is a smooth and refreshing pilsener. There seems to be a trend forming here of beers brewed down on the sunny Iberian peninsula doesn’t there? 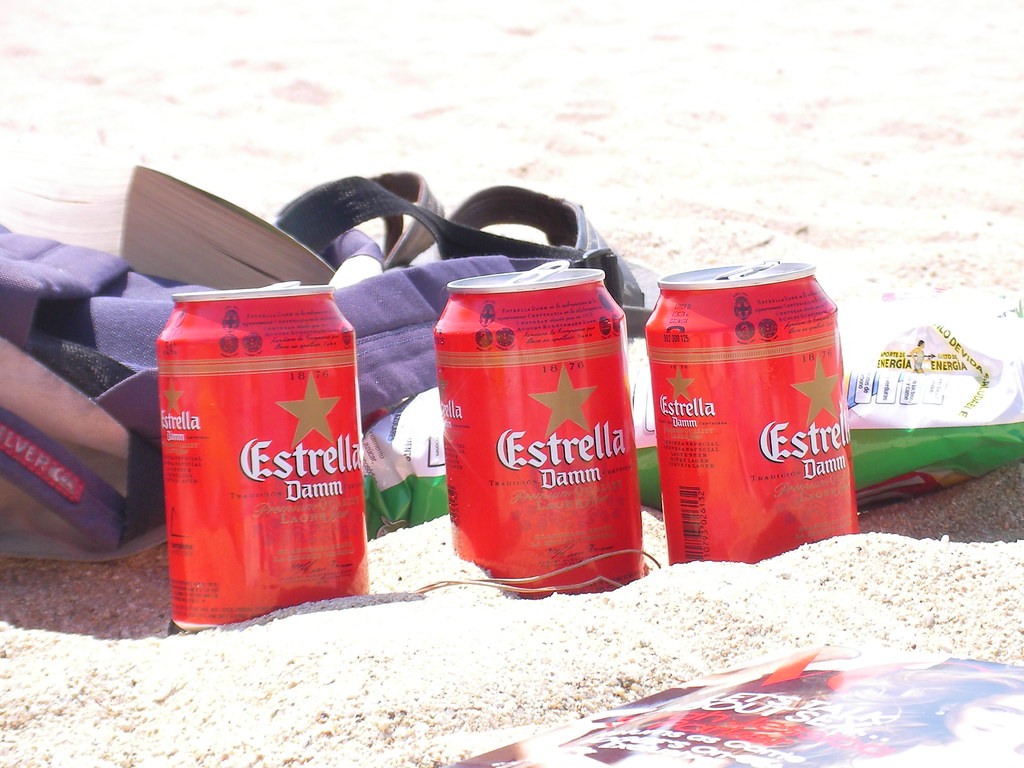 It comes in small red cans in its homeland of Barcelona, Spain and is the perfect companion when watching FC Barcelona thrash everyone there ever was in football.
Since returning to the UK, I’ve found you can see it on tap alongside other lesser known beers in some of the more niche London pubs in places like Islington.

Hailing from Belgium, Chimay is one of the strongest (ranging from 7% to 9%!) Belgian beers around. It comes in 3 different varieties – Blue Cap, Red Cap and Triple and each has their own individual taste. It’s one of only 6 beers that can be called a Trappist beer, which is a beer that is brewed only in a Trappist monastery by dedicated monks that give back all the money they earn to the community. It hails from the Chimay region in Belgium and the picture above is of some Chimay Blue Cap I tucked into on my first visit to Brussels back in December 2009. Chimay isn’t easy to obtain in most parts of the world (and is, as a result, pretty expensive) but in Belgium you can pick it up at any convenience store. Probably best not to smash back half a dozen at these, unless you like finding yourself passed out in the snow somewhere.

I first tried this beer back in Melbourne at the Belgian Beer Cafe and really enjoyed the fruity tones of it. The blonde variety grew on me, and I have since consumed very many litres of it whenever I’m within earshot of Belgium. 🙂 A friend and I enjoying a Leffe in Antwerp, Belgium.

It also comes in a dark variety that is a lot heavier to theÂ palateÂ than the blonde, but both are still pretty strong as per Belgian standard, coming in at around 6%. Leffe in general traces its roots back over 800 years and originated in the Abbeys of Southern Belgium. Not sure what it is with Belgians and monks brewing super strong beer hey?

Seeing as it’s the season for Oktoberfest, it seems rude not to mention one of the most consumed beers available at the event. Hofbrau is one of the widest known Bavarian beers you can get, and their tent at Oktoberfest is the largest. Here we can see it served up in a one litre massÂ in the Hofbrau Festhalle at Oktoberfest. For a beer served in such epic volumes, it has to be easy to drink. You can also sample it at one of the many Hofbrauhaus around the world. I think I first tried it in Hahndorf, South Australia a few years back. Little did I know how much more of it I would be swilling in Germany not long after..

Who has tried the beers I’ve listed and what do you reckon? Do you have a favourite I haven’t mentioned from a country you’ve travelled to?